This is an entirely new standalone core box, including all the content you would expect in a Zombicide base game: Survivors, Machines, Xenos, Tiles, Missions, Equipment, Tokens, etc. While Dark Side is an independent entry point into the Zombicide sci-fi universe, it is also fully compatible with Zombicide: Invader, which means it also acts as an expansion for it, bringing a lot more content to your game.

In Dark Side, players take on the role of the soldiers of Green Squade and delve into the underground mining facilities of PK-L7. There they will face a new breed of Xenos: Drillers! these red devils benefit from the pits that the Driller Abomination digs up, using them for extra protection, and to make surprise attacks on the Survivors. Players will also have to contend with the crushing darkness of the tunnels, which severely hamper ranged combat. With new equipment at their disposal, and new tactics to be learned, Green Squad might just stand a chance to make its way out of the dark! 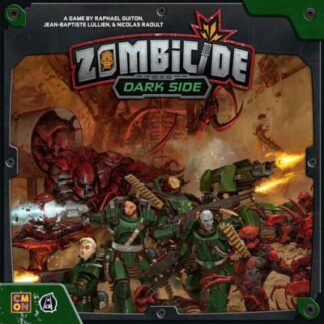