The Prophecy of Kings expansion is packed with new content for Twilight Imperium (Fourth Edition). The galaxy has grown far larger as seven never-before-seen factions enter the game, each boasting its own unique strengths and weaknesses, from the gene-altering powers of the Mahact to the watchful guard of the Argent Flight, to the mysterious and ancient Empyrean. And new factions aren’t the only way the galaxy grows bigger! Forty new system and hyperlane tiles add new planets and obstacles to the map, and with two new colors of player components included in the box, you can play Twilight Imperium with up to eight players.

Our brand new Twilight Treasury Upgrade Kit is the perfect littel plus you will need to be able to store the Twilight Imperium (Fourth Edition) basegame and the Prophecy of Kings Expansion in the box of the base game.

To fit both games in one box, we had to replace a few trays from the original Twilight Treasury.

Please keep it in mind, that this is an upgrade kit, to enjoy it fully you will have to own the original Twilight Treasury organizer too.
With all components inside the lid will have a 4 cm lift. This product is a kit that requires assembly. We recommend the use of wood glue (sold separately). 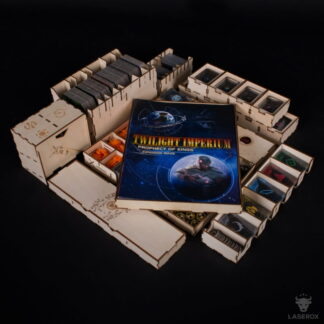