Add to the roster of your Champions with the Circle of Blood! This expansion adds Korvash, Mariusz, and Rath to your Champions. Let’s take a look at them! When Korvash grasped the hilt of the old blade he found in the tomb, his mind was consumed with dark visions; promises of a world on fire, and of his enemies kneeling before him. Filled with a desire to make his dreams a reality, he submitted to the presence within the sword, becoming its willing servant. Korvash would go on to take over his tribe, and lead them in a bloody conquest of the Hillsglade. Korvash’s confidence and power grew with every victory. But the visions never stopped, and Scornblade’s hunger was never sated.

The life of Mariusz Demont has never been easy, despite being born into nobility. A member of the Moontouched, Mariusz showed no sign of lycanthropy, relegating him to a life of service to
his older, more blessed brothers. Treated with contempt throughout his life, it was during an attack that left his father Angren dead that Mariusz’s gift revealed itself. Exploding into a rage-filled beast, he slaughtered friend and foe alike, his years of torment blinding him to his bloodlust. Despised by his own people as a traitor, Mariusz counted none his ally as he continued his cursed existence.

As Kilgore’s armies grew, so too did the strength of his enemies. Many enemies were crushed on the battlefield, but others needed a subtler touch. These enemies attract the attention of Rath, Kilgore’s most trusted and lethal assassin. A subterran of incredible agility and ferocity, he is the deadliest weapon in Kilgore’s arsenal, able to slip quietly into any location, and execute his target. Rath served Kilgore loyally for many years, reveling in the chaos and destruction he wrought. 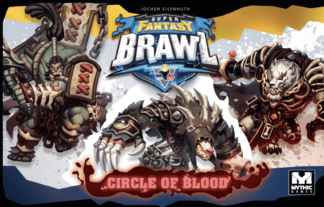