The world struggles in the Cold War, and many see the sky as the next battlefield. The era of Space Race has just begun. Do you have what it takes to lead a daring space agency into a new age of human achievement?

Space Race takes place during the first seven decades of the space conquest, and players become directors of newly established Space Agencies. Their goal is to expand them and to achieve astonishing breakthroughs. During the game, players will develop their Space Agencies by acquiring various cards (engineers, technologies, space programs) from a shared pool of cards called Universe.

Space Race: The Board Game is a game based on finding synergies and constructing powerful combinations out of different abilities. There is no guaranteed winning strategy: players have to respond to an ever changing environment in order to identify the best course of development while competing with their opponents for the most interesting discoveries.

The game is played in seven rounds. In every round, players acquire new cards into their agencies and activate abilities on cards they already own. In order to do this, players spend one of the limited set of Control Cards during every round. The player who creates the most developed Space Agency, builds the most impressive Laboratory and reaches the most remarkable breakthroughs wins the Space Race.

Space Race uses a simultaneous action selection mechanism at the beginning of every round, when players choose one of their remaining Control Cards that will determine which abilities players can use during the round. Every Control Card activates one of four possible stripes on cards and players can only use those abilities that are on the active stripe. As there are only 3 Control Cards of each of the 4 types and no Control Card can be used more than once, players have to combine different types of cards and abilities to be successful during the 7 rounds of the game. 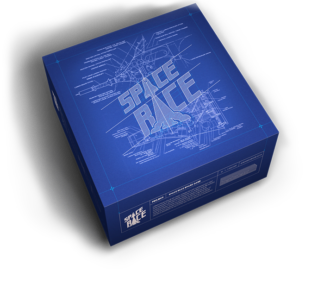