In Paris, you take on the role of wealthy real estate investors in the Paris of the 1890s. Paris is at the height of its transformation into one of the most beautiful cities in the world.

After having successfully organized the World Fair in 1889, topped by the construction of the Eiffel Tower and celebrating the centennial of the Storming of the Bastille, Paris goes through a period knowns as “la Belle époque”. The architecture of Paris created during this period ranged from the from Beaux-Arts, neo-Byzantine and neo-Gothic to Art Nouveau, and Art Deco. It is your task to purchase some of these magnificent Parisian buildings in order to make profit, and invest in the development and upkeep of some of Paris’ most iconic monuments and landmarks.

In “Paris”, players take on the roles of real estate investors trying to purchase the most exquisite buildings in late 19th century Paris. Players try to score as many Victory Points (VP) by purchasing buildings and obtaining Bonus Tiles. 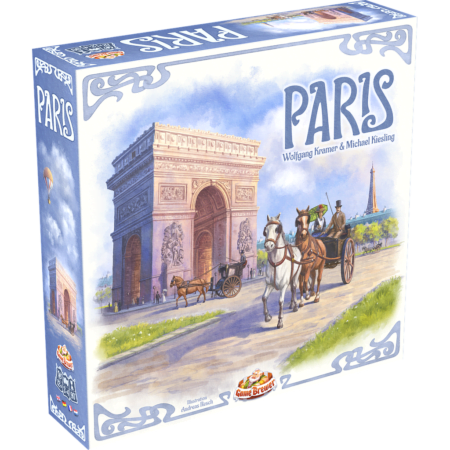