The Frostrivers tribe dwells along the Great Frozen River. Its members live in harmony with Nature. The tribe obeys the laws of the Four Elders, themselves guided by the most venerable of the Elders, the Neta-Tanka. When the Neta-Tanka enters the twilight of life, the Frostrivers gather at the Sacred Grounds to designate a successor. During this ceremony, each clan presents a young leader who will need to demonstrate generosity and the ability to provide for the tribe in order to become the new Neta-Tanka.

Gameplay:
When it is your turn, place a worker on the board. All the players place their workers, one at the time, until everybody has placed all their workers.

Then, in the order of the turn, the players trigger all their workers.

Think ahead, because some actions require other actions to be triggered beforehand! For example, if you want to get pelts, the “Hunt” action must have been triggered earlier in the turn. And when you skin the game to get the pelts, then the meat becomes available for the other players. It is crucial to remember the turn’s order when you place your workers, or they might have nothing to do when you resolve your actions!

There are different ways of scoring points in the game. You score points by:

The player with the most points at the end is declared Nētā-Tanka! 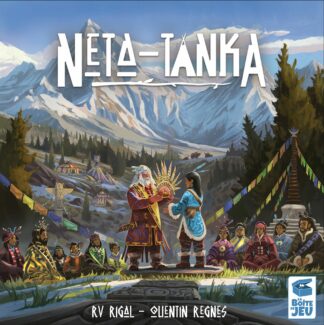