KeyForge: Dark Tidings is the fifth series in the KeyForge line. As always, each deck in the line contains cards from three of the seven houses included in the line, but for Dark Tidings the Dis house will be replaced with the Unfathomable, which specializes in controlling their foes by exhausting enemy creatures. Some cards keep your opponent’s creatures down, making it difficult for them to muster a fighting force or reap enough æmber. Once your enemies are exhausted, you can keep them out of commission with other cards or even wipe away their board.

Each Dark Tidings deck also includes a high/low tide card. The card starts the game out of play, but eventually one player will bring it into play, especially since some cards in Dark Tidings can carry out their effects — or have a massively larger effect — when the high tide is on that player’s side. Many effects can raise the tide, but if they’re not available, the player with low tide can always suffer three chains to turn the tide in their favor.

Dark Tidings also features the debut of “evil twin decks”, a new type of deck. For example, you may open a deck that’s entitled “Speaker Domitia’s Evil Twin”. This deck is an exact copy of “Speaker Domitia”, a real deck that has been printed and can be found by another player out in the world. The crucial difference is that in an evil twin deck, many of your creatures look a little different. Specifically, in Dark Tidings, many creatures have evil twin variants, and if you find an evil twin deck, every creature with an evil twin variant appears in that form. These evil twin creatures feature new artwork, graphic design, and abilities, making them a significant departure from the original creature. 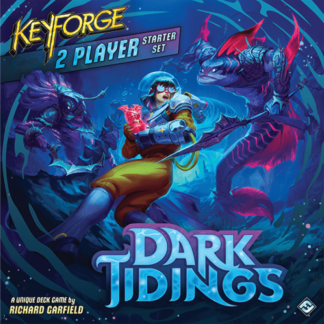