Descent – Legends of the Dark

Forge your own legend as a hero of Terrinoth in Descent: Legends of the Dark, the definitive cooperative dungeon-crawling board game for one to four players!

Across the gripping quests of an unfolding campaign, you and your fellow heroes will venture across the realm, battling terrifying monsters, unlocking new skills, and exploring a wondrous fantasy world. Legends of the Dark features a fully integrated companion app, opening the door for an unforgettable journey as you explore high towers, dismal tombs, dark forests, and the city of Frostgate. With 46 pieces of 3D terrain and 40 striking hero and monster miniatures bringing your game to life, Legends of the Dark is an invitation to adventure that no one will want to miss.

Although Journeys in the Dark featured the Road to Legend companion app, that game was always designed as a competitive experience, pitting one to four hero players against a single overlord player. Legends of the Dark harnesses its integrated companion app to deliver a cooperative game from the very beginning, freeing you and your friends to fully focus on becoming the heroes of Terrinoth. 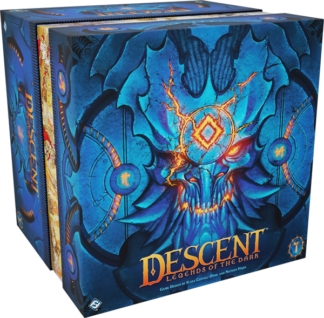