The Russian Army is a Coalition expansion for Commands & Colors Napoleonics.

Russia, was ruled until 1796 by Catherine the Great. It would then suffer under “Mad” Tsar Paul I, until his assassination in 1801, which brought his son Alexander I to the throne. Alexander, in command of a Russian army that was as vast as the territory from which it was drawn, did his best by various treaties and alliances to counter the increasing power of France under Napoleon without going to war.

The Russian army at the time of Napoleonic wars still had many characteristics of Peter the Great’s regime; senior officers were largely recruited from aristocratic circles, and the Russian soldier was regularly beaten and punished to instill discipline. Furthermore, many lower-level officers were poorly trained. Yet the Russians involved in hostilities with its neighbors – Sweden, Poland, Turkey and Austria – were capable of astonishing feats and total, blind obedience to orders.

In 1805 Britain and Russia signed an alliance against France. In 1806, Prussia joined the Coalition and Prussia and Russia mobilized for a fresh campaign. After Napoleon’s humiliation of Prussia at Jena, the French Emperor turned his attention to subduing his Russian foe and marched into Poland. After a series of sanguinary battles, the French drove Russian forces out of Poland back to Mother Russia and created a new Duchy of Warsaw, but made a solid treaty between the two nations at Tilsit.

In 1812, the Russo-French treaty gradually became strained, as the requirement of joining France’s Continental Blockade against Great Britain was a serious disruption of Russian commerce. Bonaparte decided to bring the Russians back into line in June, and invaded Russia hoping to inflict a major defeat on the Russians and force Alexander to sue for peace. The invasion of Russia and the retreat of the French army, as many historians point out, proved to be the turning point in the Napoleonic Wars.

In 1813 Russia opened the campaign against Napoleon joined by Prussia and Austria, and during the three-day battle of Leipzig, Bonaparte’s fate was sealed.

In this expansion you will find 18 historical scenarios that focus on the Russian Army battles from 1806 to 1814 against Napoleon, plus all the new units you’ll need to field for these engagements. 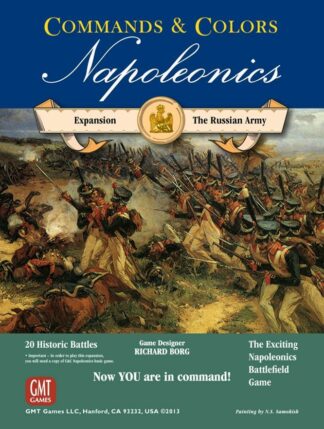 You're viewing: Commands & Colors: Napoleonics Expansion #2 – The Russian Army (3rd Printing) €54.00
Add to cart
This website uses cookies to improve your experience. We'll assume you're ok with this, but you can opt-out if you wish.Accept Reject Read More
Privacy & Cookies Policy
Necessary Always Enabled