In Altar Quest, each player chooses to play as a hero with their own cards and equipment. The players choose a quest deck to undertake, a threat deck to serve as the main enemy forces, and a sinister villain deck. Each of these decks are fixed and require no assembly, but can be mixed and matched to create a wide variety of combinations. In addition the enemies in the chosen threat deck, the danger of lurkers is always present in every quest. Lurkers are represented by a deck of various types of enemies that add to the variety of enemies heroes must defeat in the game.

While heroes attempt to complete their quest before drawing the attention of the almighty villain, the unstable magic of the altars constantly affect the game. The altar dice are tied to the mystical powers known as “rhunes,” which can enhance cards in different ways. Each time an altar die is used (either by the heroes or the enemy), that die is rolled to create an ever-changing mix of rhunes to draw upon.

Inspired by the modular deck system that was introduced in Street Masters and Brook City, Altar Quest is an epic fantasy adventure game that provides a deep game experience whether as a one-off game or an engrossing campaign. 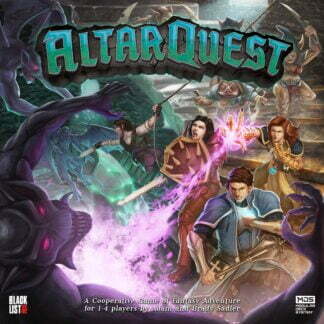