For centuries, the relationship between Britain and France has been marked by wars and rivalries, but also by mutual alliances. Both societies have a markedly different conception of Europe, but an intense commercial relationship that allowed them to work together in a common interest: the construction of the Channel Tunnel.

In 1987 Channel Tunnel, you get to put yourself in command of a team of builders from Britain or France to unite the two countries under the sea! In this competitive two-player game, you need to lead your team of workers, develop technology, and seek funding to bring the tunnel boring machine to the meeting point at the heart of this epic engineering feat. When the center of the tunnel length is reached, players earn points based on how far have they developed their technology tracks, which cards they have, and whether they haven’t deviated with their machines too much.

When taking an action during the game, players play part of their tower of colored discs to perform it. This action won’t be available for the rest of the round unless someone plays a taller tower (with more discs) on it. As soon as both players pass, return the discs to the bag, then start a new round. 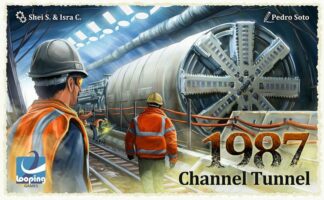