In 1911, Roald Amundsen and four companions were the first human beings to stand at the South Pole. Using skis and dog sleds, they beat Robert Falcon Scott’s British expedition by just a few weeks. Scott and his men reached the South Pole only to find Amundsen’s Norwegian flag planted in the frozen ground. They died on their return journey not far from their base camp.

1911 Amundsen vs Scott is an asymmetric game for two players, with both of them trying to be the first to reach the South Pole. Each player takes a different route to the South Pole, with these routes consisting of a path of colored dots.

The game is composed by a deck of cards for both players with a row of 3 visible cards. On each turn a player can:

The first player to reach the South Pole wins. If the deck runs out for the second time, both players are lost in Antarctica and lose the game.

This game includes 4 expansions inside:
– “Patrons” (8 new cards). 4 British patrons and 4 Norwegian patrons with a special effect each.
– “1912 The Way Back” (second board + 10 new cards). The explorers can play the return to the ships with new rules.
– “Damned Weather!” (5 new cards + 1 die). A small expansion to represent the influence of weather and add a little bit of gambling to the game.
– “Food Depots” (4 white cubes). Only in the second edition!. The explorers made previous short trips to create food depots that they could pick up in the final trip. 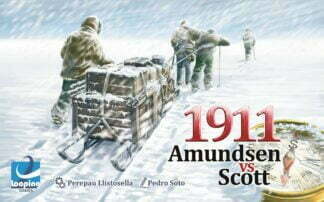